Blue skies and fluffy white clouds cannot adequately convey the feeling of digging post-holes in 96 degree heat. But J.C. Jones of Hamilton was a brave soul, and he wanted to see the project to its finish. After Diana Ani Stokely of GRAFIX to go designed the information signs, and they were printed and laminated and mounted on metal sheets, Mr. Jones welded frames to display them to their best advantage. On Tuesday, September 2, 2014, all three signs were installed at the Cleng Peerson Farm. 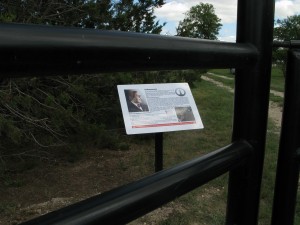 Even before you enter the property, you can see the Velkommen sign just beyond the gate. It is placed there so that people may inform themselves about the property and find contact data as well. The informational sign briefly describes the property and its significance to the local history of the Norse Community. 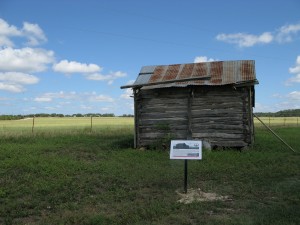 The sign at right is installed on the west side of the Cleng Peerson cabin, out of sight if you are photographing the cabin from the front. It is easily seen as you enter the property, and tells a brief history of the cabin, and plans for its preservation. 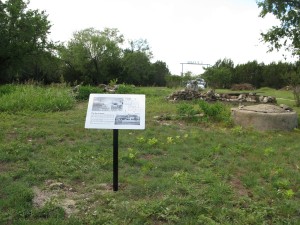 The third information sign is placed on the east side of the site where the rock house once stood. On the sign itself is a photograph taken of the rock house, and the Colwick family can be seen standing on the long porch which runs north and south. As you read the sign, and look ahead, you can see the remains of that porch, approximately in the same position as is shown in the old photograph. It is hoped that the information sign will help visitors to imagine the rock house as it was when Cleng Peerson made his final days there, in comfort and in company of his friends, the Colwicks.